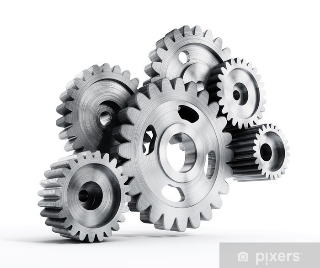 Going through the Motions

The Treadmill of Going through the motions

A man stopped at a local gas station and after filling his tank, he paid the bill and bought a soft drink. He stood by his car to drink his cola and watched a couple of men working along the roadside. One man would dig a hole two or three feet deep and then move on. The other man came along behind him and filled in the hole. While one was digging a new hole, the other was 25 feet behind filling in the hole. The men worked right past the guy with the soft drink and went on down the road.

“I can’t stand this,” said the man tossing the can into a recycle container and heading down the road toward the men. “Hold it, hold it,” he said to the men. “Can you tell me what’s going on here with all this digging and refilling?”

“Well, we work for the government and we’re just doing our job,” one of the men said.

“But one of you is digging a hole and the other fills it up. You’re not accomplishing anything. Aren’t you wasting the taxpayers’ money?”

“You don’t understand, mister,” one of the men said, leaning on his shovel and wiping his brow. “Normally there’s three of us: me, Greg and Matt. I dig the hole, Greg sticks in the tree, and Matt here puts the dirt back.

Going through the motions is like running a mile on a treadmill, there is a lot of effort and energy expended, but no real progress.

The subtle trend in Christianity is going through the motions.

Picture, if you will, the almost frantic atmosphere of a huge metropolitan hospital. Doctors and nurses move methodically through the hallways, like preprogrammed robots, tending their flocks. The coldness of walls lined with charts and tables with computer screens seems to be broken only occasionally by the scent of fresh flowers awaiting delivery to one of the rooms. Inside room after room lie patients awaiting surgery, awaiting news of their surgery, or awaiting the hand of a friend who walks through the door to say, “I care.”

Behind one of those walls, in one of those rooms lies Misty O’Neil. Misty is a Christian. She belongs to one of those active churches down the way who pride themselves in having a handle on Bible doctrine. The sign in the front on the church reads “the fastest growing church in the state.” Their bulletins and social media pages read, “Distinctively Different by Design.” They have many church leaders and several pastors. The Senior Pastor is a graduate of “the” seminary. He uses all the right commentaries, techniques, and was even written up in one of those Christian magazines as being an authority on church growth in postmodern Christianity.

When Misty first got ill, she became the object of a great deal of attention. They had special prayer for her on Wednesday and Sunday nights. Her name became a constant in the bulletin and church prayer chain emails. But Misty committed the cardinal sin, she didn’t get well, and she didn’t die. She just suffered. Soon the church, not knowing how to deal with her lingering illness, began to move on to other things. The daily visits to the hospital became weekly, and soon not at all. Days grew into months and soon Misty got lost in the shuffle of preprogramed Christianity, just going through the motions.

What if I had given everything instead of going through the motions?

Singer Matthew West penned the following words to a song while laid up in the hospital not knowing if he would ever be able to speak or sing again. In 2007, doctors at the Vanderbilt Voice Center in Nashville discovered a vascular polyp and hemorrhaged blood vessels on West’s vocal cord.  In addition to undergoing surgery, he was unable to speak for a total of two months following the diagnosis.

West, said, in an interview on CBN (Christian Broadcasting Network, “Matthew West Emerges from a Season of Silence with ‘Something to Say,’” January 14, 2008), “No matter how many mistakes we’ve made or trials we’ve faced, it’s the brokenness of our lives that God uses to give us something to say to the world,” he continues.  “I was sitting in church one Sunday after my surgery when my pastor read a quote from C.S. Lewis: ‘God whispers to us in our pleasures, speaks in our conscience, but shouts in our pains; it is His megaphone to rouse a deaf world.’  It’s easier to cover up the weakest moments in life, hoping no one sees, but that’s not God’s plan for us.”

I don’t wanna go through the motions

Without Your all-consuming passion inside of me

What if I had given everything?

Instead of going through the motions

Biblical principles on going through the motions.

The danger, of going through the motions, was revealed in some of Jesus’ most sobering words  (Matthew 7:21-23) “Not every one that saith unto me, Lord, Lord, shall enter into the kingdom of heaven; but he that doeth the will of my Father which is in heaven. Many will say to me in that day, Lord, Lord, have we not prophesied in thy name? and in thy name have cast out devils? and in thy name done many wonderful works? And then will I profess unto them, I never knew you: depart from me, ye that work iniquity.” It may sound a bit trite, but getting into Heaven is not what you know, but Who you know! Going through the motions can have eternal consequences.

Jesus tells us to love the Lord our God with all our heart, soul, and mind (Matthew 22:37). How can that happen if we just go through the motions? Sounds more like a rule to keep, a duty to perform, rather than a relationship to flourish.  Rules without relationships result in resentment and ultimately rebellion.

Could we be living among a generation that has learned, how to do Christianity, rather than how- to be a Christian?

What if, instead of going through the motions, we gave Him everything.?

About the Author: Betty Keller